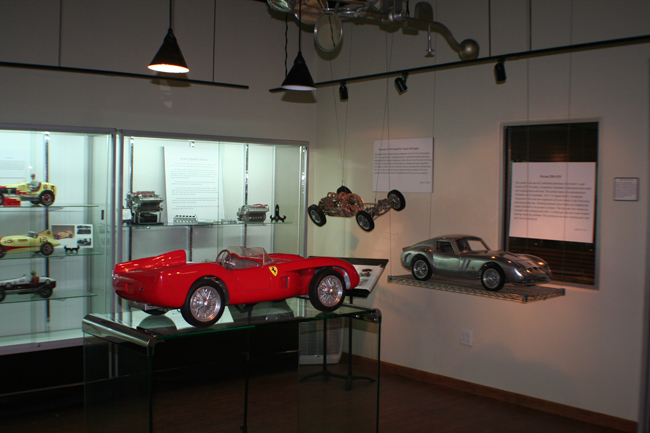 May 31, 2012, Fort Worth, TX – A one-of-a-kind collection of Jeron Quarter Classic model cars is on exhibit at the Dallas/Fort Worth Elite Toy Museum, open 9 to 5 Monday through Friday at 5940 Eden Drive in Haltom City. The exhibition will run from June 1 to October 30, 2012. 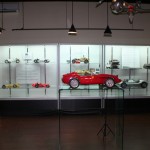 Jeron models—built from the mid-1980’s to mid-1990’s—are detailed working quarter scale models of some of the most iconic high performance cars ever built. Originally designed for a planned miniature “Grand Prix” circuit that never materialized the limited edition scale models continue to intrigue and fascinate almost two decades after the last one was built.

The original models measure roughly four feet long, weigh 60 pounds and can reach 50 miles per hour thanks to large hand-built single-cylinder gasoline engine. More detailed models, powered by quarter-scale V‑12 engines, were under development when Jeron was forced into bankruptcy. The exhibition includes the world’s only working v12 Ferrari Jeron, a prototype. At less than 12” long, it’s a gem.

Since then the continued interest of Jeron fans, many seeking to complete models left unfinished when the company failed, has created a vibrant market for the few Jeron models and parts available. Complete models bring well over $20,000 each at auction, while original components, such as frames, often fetch up to $2,000.

The museum has assembled several complete Jerons and components into an exhibition that gives the visitor a glimpse of the Jeron not seen before. “The Jeron models will excite any fan of exquisitely made scale models,” said Curator Rodney Ross. “We are very fortunate to have been able to add them to the toy museum’s collection recently. They have not been seen since the bankruptcy in the early 90’s,” said Ross.

In a 1994 article in the Austrian Auto Revenue, Bernhard Schmidt described Jeron models as “one of a kind, but not original,” saying Jeron co-founder and designer Ron Phillips bowed “before all to the cult of beauty.  Just about everything is chromed, (which) in truth never was.”  While purists may shudder where the Jerons stray from historical accuracy, the sheer beauty of the designs is undeniable. 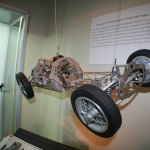 In addition to the Jeron models, the upcoming exhibit will include a collection of scale models of open racers from the 1950s, including a stunning model of the J.C. Agajanian dirt-track racer driven to victory by Troy Ruttman in the 1952 Indianapolis 500. Indy fans will also delight in seeing the artistry of world-renowned model maker John Snowberger’s open racer models, many of which bear the signatures the drivers who immortalized their full-size counterparts.

DFW Elite Toy Museum accepts donations of rare toys from anyone wishing to preserve them and leave a legacy. The museum is located in Fort Worth, TX and is free and open to the public. To schedule a group tour or inquire about donating toys, call 817.834.3625, x.230.  It is owned and operated by entrepreneur and Tarrant County commercial real estate developer Ron Sturgeon.

Cutline:  Road ready or dedicated race car, all Jeron models exude high performance. These Jeron models, along with many other one-off models, will be part of the newest exhibition at the Fort Worth toy museum.