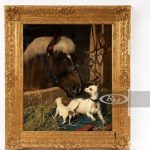 Fort Worth, TX. — May 4, 2021 — Almost half of the households in the United States have a dog and so it is no great surprise that dog-themed items are extremely popular with collectors. DFW Elite Toy Museum in Fort Worth, Texas, recently closed out one of its most popular exhibitions of paintings and sculptures featuring dogs, dog collectibles, and dog-themed antique toys.

Many of the most popular pieces from that exhibit have been consigned to RM Sotheby’s to be part of its second big online auction of the Spring, Handle with Fun. The auction will feature unusual automobiles, antique coin-operated games and a variety of antiques that evoke fun and whimsy.

“We’re always adding to our collection the toy museum and simply had to consign some wonderful dog-themed pieces collected by the owner of the museum to make room for new acquisitions of special rare toys,” said DFW Elite Toy Museum Curator Rodney Ross.

Many of the pieces celebrate the special bond between dogs and other animals and dogs and dog owners, and many of the antique toys featuring dogs and dog collectibles fit perfectly with the theme of fun that unites the items in RM Sotheby’s auction, said Ross.

In addition to the dog-related items, the museum has also consigned some vintage Mercedes pedal cars, several one-off scale models and a few German driving school models from its collection.

Bidding for items featured in Handle with Fun opens May 5, 2021, 11 am EDT and lots will close in a staggered format starting at 10 am, EDT on May 12 and continuing throughout the following day. To see available lots or to register to bid, visit the auction’s page at RM Sotheby’s.

Admission to the toy museum is free and it is open weekdays from 9-5 pm and on Saturdays by appointment. The museum includes more than 3000 items collected by Fort Worth serial entrepreneur and Fort Worth commercial property for rent developer Ron Sturgeon, who was featured on CNBC’s Blue-Collar Millionaire program.

The toy museum includes scale models, rare vintage racecar toys, and one of the rarest Tippco toys ever made, The Eva Braun Mercedes, of which there are fewer than six known to exist. The museum is located at 5940 Eden Drive, Haltom City, TX 76117. Watch for a new exhibit starting soon.

The full list of consigned items is as follows:

DFW Elite Toy Museum is a free museum open to the public located at 5940 Eden Drive in Haltom City, TX. The museum includes more than 3000 pieces collected by serial entrepreneur and real estate developer Ron Sturgeon. The museum was recently featured in the DFW guidebook “100 Things to Do in DFW Before You Die. To learn more, visit the dog-friendly museum’s website at dfwelitetoymuseum.com or follow the DFW Elite Toy Museum on Facebook.